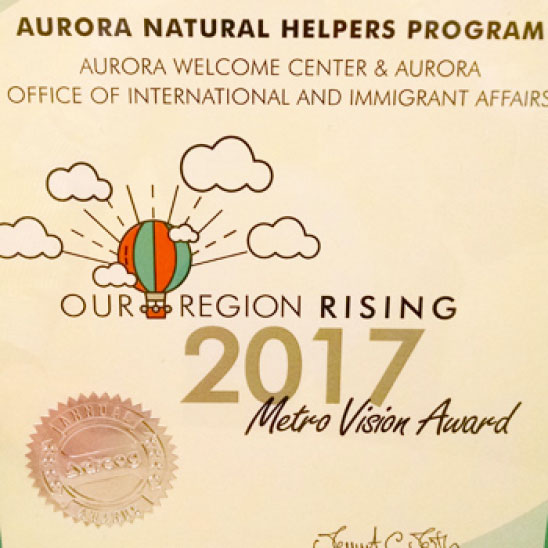 THE AURORA WELCOME CENTER (RECENTLY MERGED WITH THE VILLAGE EXCHANGE CENTER) AND AURORA OFFICE OF INTERNATIONAL AND IMMIGRANT AFFAIRS RECEIVED A 2017 METRO VISION AWARD FROM THE DENVER REGIONAL COUNCIL OF GOVERNMENTS (DRCOG). THE AWARD RECOGNIZES THE CITY’S NATURAL HELPERS PROGRAM AND WAS PRESENTED AT DRCOG’S ANNUAL AWARDS CELEBRATION APRIL 26, 2017.
The Village Exchange Center is proud to now partner with the City of Aurora in celebration of its diverse and growing immigrant population. As the demand for immigrant services grows, the Natural Helpers Program ﬁlls a critical role in accessing those services. The Natural Helpers Program mobilizes a group of volunteers who are immigrants themselves to help other immigrants and refugees navigate life in a new country.

“Aurora is the only city in the state of Colorado and one of the few in the country with a comprehensive citywide strategy to address the issue of immigrant integration,” said Ricardo Gambetta, manager of the Oﬀice of International and Immigrant Aﬀairs.

DRCOG’s Metro Vision Award program recognizes exemplary projects, plans and initiatives that signiﬁcantly improve the quality of life in the metro region. The regional council has been honoring outstanding achievements for more than 30 years.