Spirituality of Belonging (I) 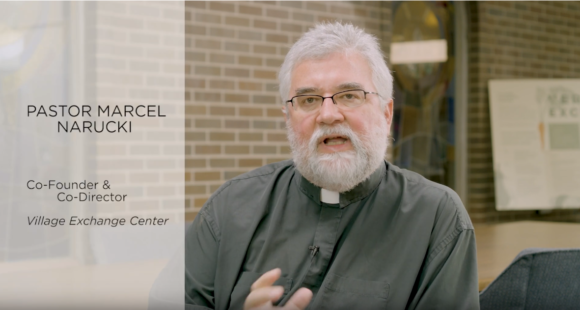 At the Village Exchange Center we sometimes engage with cultures and people who are baffling to home grown sensibilities, but often encounters are unpredictably and wondrously enriching.  Notably, the Center recently hosted a Hindu Puja festival at which the young and old were deliberately celebrated with various recognitions, at the end of which the young and old, men and women, disabled and healthy, danced together, interchanging partners in a sheer joy of being all together.  I thought where does this happen in contemporary American culture?

The emergence of communications has made us aware of, and has facilitated, global connections.  Unprecedented in the consciousness of the world is a growing awareness around the world that we belong to one another, that we share a fellowship in destiny.  For some this is merely a calculation for survival and political peace, while for others it is additionally a spiritual truth, having to do with our ultimate identity and fulfillment.  In this context, when we reflect on what it means to be a human being, we understand to be a person is constituted by being in relationship.

Belonging goes to the essence of what we are, to our shared genes and world.  Even consciousness is always a consciousness of some thing, and is therefore always relational.  Relationship and belonging addresses our humanity, existentially and spiritually.  A spirituality of belonging expresses well our path of being with and for others.

When we find ourselves committed to the path, we find an expansion of life, both on the horizon and within ourselves.  We find discovery and newness and a certain buoyancy, carried in a depth of purpose, toward personal fulfillment.  We discover, unequivocally, other people are our other self.  In the Christian faith the imperative to love one’s neighbor as oneself is literal; it is not to love the other as much as one loves oneself, but to love the other as oneself.  A new world is opened here.  The joy of others and the sorrow of others is mine, as well as the lived-into discovery of love and compassion as the meaning of life.

It’s a downstream experience to welcome the joy of others, but we can be afraid of the suffering of others.  We pull back from the overwhelm.  The heart yearns to give itself away, but also fears that in doing so, it may get hurt, or lost.  A few weeks ago in New Zealand, when the massacre of 50 Muslims at worship, including children, struck the world, the face of a young local Muslim woman, a community leader here, manifested the incomprehensible horror.  She opted to view the video the killer made.  Her face was difficult to stay with, seared, panicked, lost in inconsolable grief.

Paradoxically, our freedom from suffering is joined to being opened to the suffering of others as our own.  Buddhism talks about freedom from suffering, but the kind of suffering it considers is the inexorable pain of the isolating suffering of the separated self, over and against the other, turned in one oneself in an unresolvable loneliness.  Buddhism’s other talking point is compassion, where being opened to the other we find ourselves buoyed in the embrace of a life larger than any mere self-referencing can allow.  It is worth saying here that the objectification of people which is also happening around the world as a reactive defense against the claims of belonging and the path we are proposing, is the opposite of compassion; it is itself suffering, and the propagation of suffering.

A heart turned fundamentally toward the other will find itself curiously, sometimes almost simultaneously, knowing both joy and sorrow.  It cannot be otherwise for a heart that is giving itself away.

The Village Exchange Center is living metaphor for something happening in the world, here described as a spirituality of belonging.  A 2016 research analysis (Factiva) showed that the lines from the well-known Yeats’ poem, The Second Coming, “Things fall apart; the centre cannot hold,” were quoted more often in the first seven months of 2016 than in any preceding 30 years.  In the context of increased global terrorist violence and social political turmoil and the pointing of the finger at the other, indeed, the center of our known world is not holding.  But in the midst of things falling apart, a new center of gravity emerges.  The Center holds.  It is no center at all, but the giving away and going out of oneself; it is in an availability and vulnerability to the other, being in relationship, in mutuality, exchange, and belonging, where life happens, surprises, and renews in the in-between.